A brief his-story of Dali the ancient capital of Yunnan Yunnan was territory of State Dian in ancient times. It came to be known as Nanzhao in the Tang Dynasty (618-907) and Dali in the Song Dynasty (960-1279). Kublai Khan’s conquest of Yunnan in the second year (1252) of the Xianzong era of the Yuan Dynasty, conquering Dali Kingdom and establishing Yunnan (1271-1368) and Yunnan Province was formally proclaimed here in the Qing Dynasty (1644-1911), which has remained unchanged until now.

The Bai People Of Dali

The superb architectural skill of the Bai people is represented by the three pagodas at the Chongsheng Temple in Dali. Built during the Tang Dynasty, the 16-storey main tower is 60 meters high and still stands erect after 1,200 years.

Dali – Also Known As The Hippie Capital Of China!

When Dali first opened up for international travellers, it was the backpacker hippies that made it first, on the Katmandu-Lasa-Lijiang-Dali-Yangshuo trail aka the pizza trail. Today in Dali there is a mixure of both tourists, long term residents (of whom many artists), backpackers and just experimentalists. A great place to see some of the local scene is Renmin road also known as “hippie street” 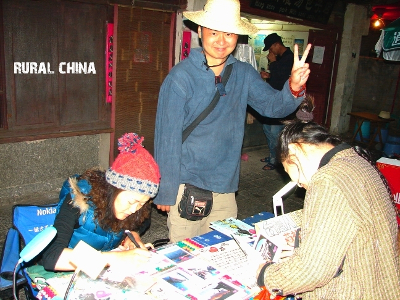 Hippie, occasionally spelled hippy, refers to a subgroup of the 1960s COUNTERCULTURE LIFESTYLE that began in the United States, becoming an established social group by 1965 before declining in the 1970s. Hippies, along with the New Left and the civil rights movement, are considered the three dissenting groups of the 1960s counterculture movement. Hippies were part of a youth movement, composed mostly of white teenagers and young adults between the ages of 15 and 25 years-old.? Inheriting a tradition of cultural dissent from the bohemians and the beatniks, hippies rebelled against established institutions, criticized middle class values, opposed the Vietnam War, embraced aspects of non-Judeo-Christian religions, promoted sexual liberation, and created intentional communities, leading some to describe hippies as a new religious movement. Hippies were against “political and social orthodoxy”, choosing a “gentle and nondoctrinaire” politics that favored “peace, love, and personal freedom.” Hippies perceived the dominant culture as a corrupt, monolithic entity that exercised undue power over their lives. They often called this culture “The Establishment,” “Big Brother,” or “The Man.” Hippie opposition to the Establishment spread around the world through a fusion of early rock, folk, blues and psychedelic rock, with the dramatic arts and the visual arts in tow. The word hippy as a term African Americans used to describe a specific type of white man who “acted more Negro than Negroes.”