Ancient Chinese people were greatly interested in the relationships and patterns that occurred in nature. Instead of studying isolated things, they viewed the world as a harmonious and holistic entity. In their eyes, no single being or form could exist unless it was seen in relation to its surrounding environment.

The Origin of the Yin Yang Theory

The original concept of yin and yang came from the observation of nature and the environment. “Yin” originally referred to the shady side of a slope while “yang” referred to the sunny side. Later, this thinking was used in understanding other occurrences, which occurred in pairs and had complementary and opposing characteristics in nature. Some examples include: sky and earth, day and night, water and fire, active and passive, male and female and so on. Working with these ideas, ancient people recognized nearly all things could have yin and yang properties. Yin and yang can describe two relative aspects of the same phenomena such as the example of the slope, or they can describe two different objects like sky and earth.
Usually, yang is associated with energetic qualities. For example, movement, outward and upward direction, heat, brightness, stimulation, activity and excitement are all yang qualities. Yin, on the other hand, is associated with the physical form of an object and has less energetic qualities such as rest, inward and downward direction, cold, darkness, condensation, inhibition, and nourishment. See Table 1 for a description of yin and yang characteristics.

Five Phases Theory
Five Phases (五行wǔ xíng), sometimes also translated as the “Five Elements” theory, presumes that all phenomena of the universe and nature can be broken down into five elemental qualities – represented by wood (木mù), fire (火huǒ), earth (土tǔ), metal (金jīn), and water (水shuǐ). In this way, lines of correspondence can be drawn: 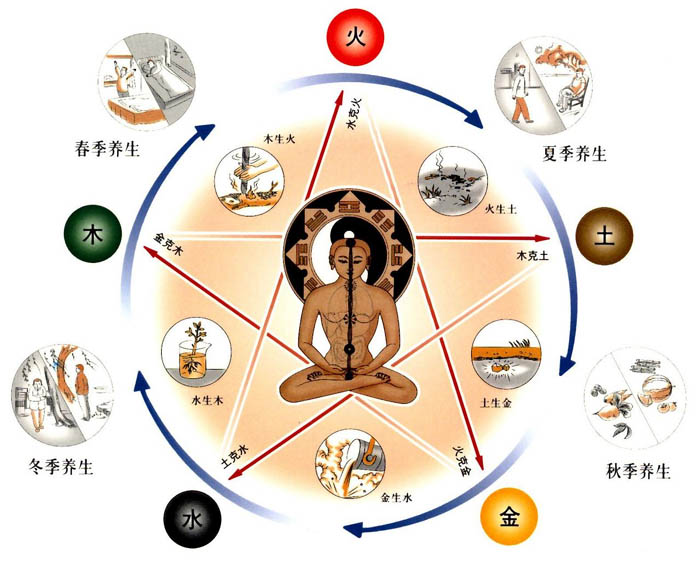 Correspondences between the body and the universe have historically not only been seen in terms of the Five Elements, but also of the “Great Numbers” (大數dà shū) For example, the number of acu-points has at times been seen to be 365, in correspondence with the number of days in a year; and the number of main meridians – 12 – has been seen in correspondence with the number of rivers flowing through the ancient Chinese empire.
The term zàng (臟) refers to the five entities considered to be yin in nature – Heart, Liver, Spleen, Lung, Kidney -, while fǔ (腑) refers to the six yang organs – Small Intesrine, Large Intestine, Gallbladder, Urinary Bladder, Stomach and Sanjiao.